Total to face court for failing to comply with the Vigilance law and the requirements of the Paris Agreement on climate change. 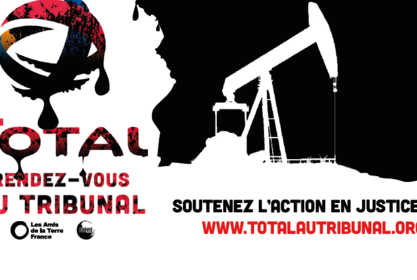 Following a meeting with a team from Total and the company’s CEO, 14 cities and the organizations Notre Affaire à Tous, Les Eco Maires, Sherpa, and Zea are calling on Total to conform its practices to the law “devoir de vigilance” by taking certain measures necessary to fight climate change.

On October 23rd, 2018, 13 cities and the 4 associations mentioned above-challenged Total after the corporation released a vigilance plan that failed to mention climate change. This omission was in direct contradiction to its legal obligation to undertake the actions necessary to prevent both human rights violations and environmental harms caused by its activities.

The global cost of adapting to climate change in the coming years will amount to billions of dollars, according to a report from the UN Environment. The cities will have to shoulder most of this burden. Thus citizens are impacted twice: they are the first to be impacted by climate change while also having to cover most of the cost. Facing this injustice, citizens and their communities are asking Total to bear some responsibility.

While Total’s new plan, published in March 2019, mentions climate change, the proposals announced are insufficient to comply with the Paris Agreement. A meeting among representatives of the associations concerned, cities, and Total on June 18th led to no major changes being made to the plan.

If within three months, Total has not taken adequate measures to reduce their gas emissions, the cities, as well as the organizations mentioned above will take Total to court for failure to comply with the law and the requirements of the Paris Agreement on climate change.

Read the Press release and other background information here.