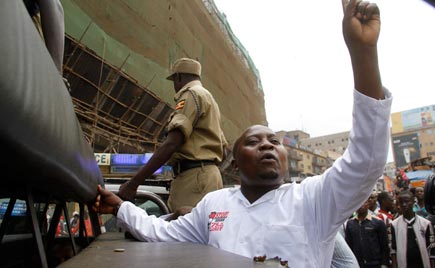 At least 14 members of Jobless Brotherhood have been arrested in Kampala for demonstrating against the ongoing plan to amend the Constitution of the Republic of Uganda to enable Museveni to rule Uganda for life.

Both the youth are being detained at Kampala Central Police station.

The youth activists were found distributing fliers inviting the public to join the struggle in Defense of constitution against manipulation by NRM government.

Police have declined to comment on why they have arrested the youth claiming that they are still investigating the circumstances which could have motivated the youth activists to go on demonstrations. 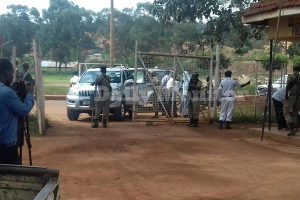 Police officers deployed at the gate of CID headquarters in Kibuli Kampala ;Photo by Daily Monitor.

Meanwhile, there is heavy deployment of both military and police officers on every streets of Kampala.

However, this is not the first time the police in Uganda is encountering with the members of Jobless brotherhood. Several times in the past, the police have arrested the youth activists for threatening violence.

On a separate note, the Uganda police have summoned three anti-age limit campaign members of parliament over allegations of offensive communications and inciting violence

The Albertine Watch dog has seen a copy of the letter dated 15th September 2017. According to the letter, the Director of Criminal Investigations has directed Mps Muhammed Nsereko, Monica Amoding and Theodore Sekikubo to report on Tuesday the 19th September 2017 for interrogation before the Commissioner responsible for media crimes .

Mr Sewanyana said: “I know I have committed no offence by speaking out my mind. I’m an MP and that’s what I’m supposed to be doing.”

Ms Monicah Amoding (Kumi, NRM) yesterday said the summonses reflect “panic on the side of those pushing for the amendments”, adding that they are moving on with mobilisations.

Mp Joseph Ssewunga said he is ready to die for defending the Constitution.

A cross section of the MPs oppose to the age limit deletion bill reaffirm their commitments to die defending the Constitution.

The spokesperson of CID, Mr Vincent Ssekate, said the four MPs must appear at the police.

“We are investigating serious cases that they must appear. If they don’t, then the police will have to use its powers in ensure that they appear for interviews,” Mr Ssekate said.
Yesterday, religious leaders under the Inter-Religious Council of Uganda led by their chairperson Mufti Shaban Mubajje said harassment of people against or for the lifting of the age limit by security agencies should stop.

The leading opposition political party, Forum for Democratic Change FDC has also revealed the plans to stage nationwide demonstrations in protest of the proposed deletion of the presidential age limit by some members of the parliament.