President Yoweri Kaguta Museveni masterminded the Death of The deputy commander of the UPDF Reserve Forces, Brig. Peter Kerim, because Peter Kerim advised him to establish an independent team to verify the actual causes of the ethnic fighting in Ituri province 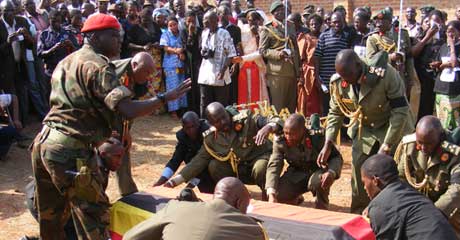 New evidence emerged into the untimely death of the deputy commander of the UPDF Reserve Forces, Brig. Peter Kerim, which occurred in 2012.

Kerim died on Feb 5, 2012, at Nakasero Hospital in Kampala where he was admitted after he fell sick. The circumstances under which he died is not known up to date. However, the government issued a report that Kerim was involved in a suspicious motor accident about three months before he died.

Many people believed that Brig Kerim did not die of natural causes as claimed in the postmortem report given to the family by the army. Family members were not allowed to even view the body of Peter Kerim. During the time of his death, Kerim was abandoned by the top leadership of the army and this could have contributed to his death.

However, new evidence emerged that Peter Kerim death was actually masterminded by President Yoweri Kaguta Museveni because Museveni felt angered when Kerim advised him to establish an independent team to verify the actual causes of the ethnic fighting in Ituri province of Democratic Republic of Congo.

Its believed that Kerim was given dangerous and hazardous poisons by President Yoweri Kaguta Museveni.

Details of the origin of Kerim death lies in the below letter he submitted to Museveni on December 17,199

RE. REPORT OF ETHNIC FIGHT IN ITURI PROVINCE, BUNIA, DEMOCRATIC REPUBLIC OF CONGO.

Your Excellency, the purpose of this report is to express myself clearly about what is taking place and this may turn to be dangerous to our forces operating currently in the D.R.C.

I am writing to Your Excellency, this report in the strongest feelings that what you have done for our country and this Region; NOBODY can dispute. Through your efforts, you have created and trained a formidable force to fight all the bad leaderships.

Therefore, Your Excellency, I believe the U.P.D.F; under your leadership has emerged in Uganda a force of the people and very disciplined in the Region.

Today, it will appear to me very bad, that some of our comrade officers and men have been killed without wars in the hands of the Civil Populations that U.P.D.F which was once liked by the people have turned against them; leave alone our people of Uganda, but in foreign land, where I feel your politics should be protected by us but we are instead spoiling it by not being clear to you NOT telling the truth.

LOOKING AT THE SITUATION

The current situation is not really good in some parts of the district of Ituri province. For instance, killing has been reported in Njugu Zone (District), U.P.D.F has been named being used by some ethnic groups to kill other groups; all that you may not be aware of. It will be bad, for me to hear International organization asks you about the killings in some parts of Congo and you are taken by surprise.

As a senior member of this army or organization and a regular officer of the U.P.D.F and who has contributed to this army or without little knowledge, I stand by my two (2) legs opposed to madam Governor of Ituri Bunia and some U.P.D.F officers of using some soldiers of U.P.D.F to kill and evict civilian population. This situation, I request to be Investigated very well.

I feel, Your Excellency, the situation in this zone has been reported one-sided whereby we are very worried; such one-sided reporting will cause loss of lives and spoil the effort of some good Cadres who may not be negative to the cause of this country! Although some of did not go much higher in learning, but under your good teachings, we used to learn and it has brought your Lovely Guidance.

Due to my strong position on this, what has happened and still going to happen on, I have been accused of so many things which have no basis. I have been called Smuggler, a Thief, a Rebel, etc., so as to shut me down. To me, I feel that is not the way you have brought us. In the CHAMA, Openness was our motto during our struggle in 1981.

Your Excellency, I will just remind you on one event during our struggle.

When we had walked several days and we were about to reach Kabamba, we had reached the assembly area, there came in your final and last reconnaissance that the enemy had dug in. Then you called us and briefed us, but some of us were opposed to you that we should go but you as Head and Eye of all those Ugandans who came from all walks of life, you strongly said NO!! if you want to go, you people should first sign and agree that all the blood of these Ugandans will not be shed on YOWERI’s name. Then the Commanders saw the point. Indeed, the soldiers were saved. We came losing fewer Comrades that it would.

WHAT WAS THE CAUSE OF OUR SOLDIERS FIGHTING WITH R.P.F. IN CONGO?

To me, I would say and comment very little that we have forgotten our method of work and the team work spirit is lost.

The Commander does not involve one who is going to participate in the actual mission work.

Both officers and men are under fear. They think once he is called, he might be arrested, yet they are called to perform the normal duty.

A superior Commander does not listen to the junior Commander who is actually the Shock-absorber who plays bodily roles in case of any situation that erupt, or in any military operation, they are always the ones who play the bigger roles there. Therefore, their opinion must be asked too.

Therefore, with these few examples, there are many but that also contributed to the cause of the fight.

WHAT ARE THE CURRENT PROBLEMS IN ITURI PROVINCE?

There is no elected political and local leadership. The current local leaderships from the province and from the MILOKA are just appointed, which appointment are being questioned by the population in D.R.C.

The army is overstretched doing all sources of works which, some would have been the work of political leaders and leadership.

Lack of mobilizations in all district (Zones) in Ituri province.

Very little has been achieved, currently, as I write, this report there is a very big problem of political wrangles between R.C.D leadership and Governor so this has created division among the people and the population is very confused about what is going on. That is why there is some small fighting coming up in the areas.

If the problems are still left to be handled by one person who is overstretched, its likely going to cause us a big problem in the DRC and we may come back home with embarrassing situation like Americans in Somalia or Vietnam.

I would suggest to you, Your Excellency, that our political Leadership must be involved directly so that they can at least try to cement what was done wrong by some Army officers and Locals Leadership in Congo.

The army must take full account and control on personnel which are in operation in the DRC.

Proper deployment by the army leadership for the purpose of confidence and morale building in the foreign land. Inquiries to be carried in the districts where fighting took place. The inquiries MUST be carried independently from local leadership.

Command and control be put in place and central operation command post be established to answer all the day to day operations and routine work Operation Safe Haven.

Clear roles to be spelt out and demarcation is necessary in that type of operation.

A clear and overall operation commander who can create harmony among all troops and rebels operating in areas that will ease the command and also our political leadership will be protected from being asked simple and useless questions. I believe the leader has laid the structures for us; it’s we to maintain and look after the whole thing in a collective way of doing things.

If all that was followed, there would be no fighting between the sister forces in Kisangani and the leadership would just do their political duties than coming to rescue the army from the situation which they Have created by themselves and it has resulted into the deaths of the soldiers.

I would also like to assure you that one person cannot do every work alone. If he is overloaded, at times he can make such mistakes which can cause more damages. I recommend that we should mobilize the Congolese themselves to be directly in their affairs as we have done to other revolutionaries by assisting them from behind.

WHO IS TO BLAME ON THE CASE OF KISANGANI AND IN OTHER PLACES IN CONGO?

Up to now, there is no report on what has happened in Kisangani that gives a stronger basis of arguments that the command must tell us what happened so that our high leadership should be in a position of explaining it. In other words, they must be protected. As I have already put it, on the above.

In conclusion, I would conclude that; –

An independent team be established to verify the ACTUAL CAUSE of the ethnic fighting in Ituri province.

A good and clear overall operation Commander capable of creating harmony among all troops and rebel groups be named.

Election must be carried out directly by the masses themselves.

Both officers and men implicated in the clashes should be immediately be withdrawn to cement the current bad relationship between the population and the army.