Since March 2017, Dei fishermen have been struggling to deal with the constant police brutality; corruption and kidnapping of fishermen by the members of Marine police .Fishermen are prohibited from fishing within 5 kilometers limit. With increasing looting and systematic killings of fishermen on Lake Albert, Marine Forces have continued to impose restrictions and heavy fines on fishermen caught fishing within the time zones agreed upon by the local communities and the beach management units.

This morning police forces led by vice chairperson of Dei beach management  unit Mr Amisi Genesio  instructed the Uganda People Defense Forces ( UPDF) battalion commands in Dei to open fire at fishermen, the operation led to arrest of 6 fishermen including the Buliisa based fisherman from Waluukuba landing site who have crossed to Dei to access market for his fish .The marine forces led by Amisi Genesio  forced  the fishermen to undress and swim in cold water before arresting them, and destroy or confiscate their fishing boats and equipment. Furthermore, during the arrest time, the Uganda People Defense forces uses gun to injure a woman who was buying fish from Munguriek. These violations are occurring at a time when the Pakwach district Chairperson LC5 Mr. Robert Omito has issued various tenders license to groups of his friends who supported him in the recent concluded Pakwach district elections. 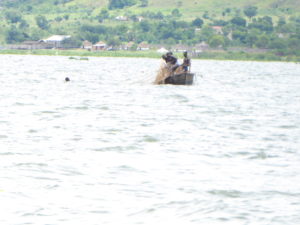 According to evidences obtain by Banathala Thala and the Albertine Watch, there seems to be a 10 points agenda drafted by the new beach management units under the leadership of Mr Patrick Udhil who has recently won the district tender to have ownership of Dei landing site for the next 8 months. In the 10 points plan, Udhil Patrick, Amisi and Omito Robert in collaboration with marine police and UPDF will jointly work together to enforce compliance and regulation in the fishing business in Panyimur.Their aim is to dominate the fishing business by having access to all the major resources of Dei landing site. According to the audio record that was leaked to Banathalathala, Udhil and Omito were heard planning how they could work together to impose heavy taxes on Congolese fishermen in Dei.They have agreed that they will collect as much as possible taxes from the fishermen to enable them acquire wealth outside Pakwach district within one year .

Due to these kinds of illegal deals by political leaders against fishermen, the Dei fishermen have become one of the poorest communities in west Nile, while other industries that are dependent on fishing, such as boat construction, maintenance of fishing equipment, and fish merchants have also suffered immensely due to sabotage by political leaders.

In the context of promoting and protecting human rights and the rules of international humanitarian law Albertine Watch continues with monitoring and documentation activities to expose and prevent violations in the fishing industries with great focus on Lake Albert .

Dei is in Panyimur sub county, Pakwach district and it’s the most populated of the three parishes of Panyimur sub-county according to the 2014 census provisional results.

The standard of living of the community of Dei has plummeted significantly since the beginning of the Ofoi Shaban leadership due to the constant targeting of Dei community resources especially distorting money from the local people in the name of government. The fishing industry and Dei fishermen are among the most severely hit by human rights violations, torture and illegal arrest and confiscation of fishermen properties. This has forced many fishermen to abandon their only mean of livelihood, while fishermen who chose to remain in this business are suffering from attacks that put their lives in danger on an almost daily basis. The ever-shrinking fishing zone and the increasing imposing of heavy taxes make it even harder for fishermen to earn a decent living and put them under the poverty line.

Arrests of fishermen are, in most cases, followed by confiscation of their boats and fishing equipment. The confiscated fishing boats usually have fishing nets, engines, generators, and torch lights on board. Today alone 6 boats were confiscated in different incidences.

The increasing violations against Dei fishermen by marine police and cross section of local politicians raise concerns that the aim no longer rests on the notion of collective punishment, but represents financial incentive as well. Marine Police and Robert Omito administration is deliberately depriving Dei fishermen from utilizing their natural resources, and they want to exploit these resources for their own benefit. 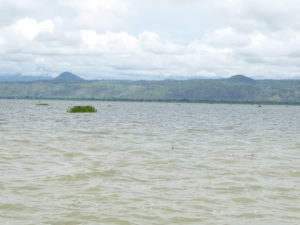 Accordingly, Albertine Watch reiterates its condemnation of the ongoing Marine police and UPDF violations against Dei fishermen. Albertine Watch stresses that a fisherman’s right to work is an inherent human right, and that the marine police and UPDF  is committing systematic violations of of indigenous peoples rights to economic development and rights to work. The marine police and UPDF with back up from district leaders repeatedly targeting fishermen, often resulting in death, injury, and arbitrary arrest in a degrading manner, as well as depriving fishermen of their livelihoods and the right to work.

Albertine Watch reiterates its calls on the international community to intervene to protect civilians and put an end to Marine Police and UPDF violations against fishermen. Albertine Watch reaffirms that the Dei is in Uganda and that the politicians of Pakwach district should stop selling the people of Dei to military men and that any measures taken by Pakwach district administration to discriminate Dei as Congo cannot change this reality. The marine police are required to fulfill its obligations under the international law, which not only prohibits violations, but also dictates the respect and realization of human rights for the civilian residents.

Albertine Watch denounces the silence of the Pakwach district Police Commander and the District Fisheries Officer as well as Robert Omito for disregarding their legal obligations and mandates under local government acts to calm down the situation on Lake Albert.

Albertine Watch reiterates its calls on the Uganda Human Rights Commission and the Offices of High Commissioner of Human Rights in Uganda  to exert pressure on Pakwach district Police boss and the district chairman to ensure respect for international law and abolish the closure/blockade policy imposed on fishermen in Panyimur.