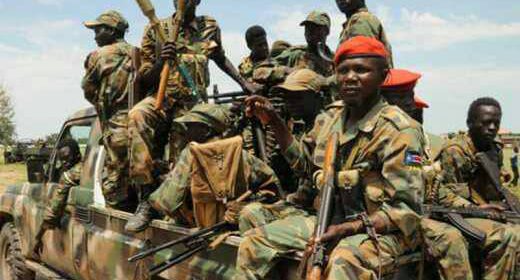 On Monday night, the South Sudan army in a long convoy drove from Yei via Oraba border in Koboko to Moyo district as they carried out their operations along the borders. The SPLA-IO currently controls the areas of Yei up to Oraba border areas where there have been sporadic clashes with the government soldiers were witnessed some months ago.

On arrival in Moyo, the government soldiers of South Sudan camped at Moyo boys primary school near Moyo Multipurpose training Centre in Moyo district and spent a night before their journey to Kajo-Keji County in South Sudan.

James Idraku, a resident of Lefori Sub County in Moyo district said unexpected troop has caused fears and people had left their homes. “The people in my village ran into nearby bushes because of fears and this is unusual with types of such weapons. Why can’t they use their own routes inside South Sudan other than using Uganda territories for launching wars against their enemies?” he asked.

Col. Lam Paul Gabriel, the Deputy Military Spokesperson of SPLA-IO, a force loyal to Dr Riek Machar, told our reporter on phone that: “We have been concerned about the ongoing operations of the government soldiers who have planned to attack our bases. The SPLA-IO therefore, wants IGAD to be serious with peace talks and we cannot continue condoning this ongoing atrocities and looting of South Sudan resources by the regime and their cliques.”

Captain Oliver Duku, the SPLA-IG Spy Chief based in Moyo said that this is not the first time South Sudan government soldiers have entered into Moyo district with such convoys because of good relationship with Ugandan government.

“It is not the first time vehicles belonging to SPLA IG moving in Uganda and this is what I know. Those people (SPLA IG soldiers) are sleeping here and others crossing to Kajo-Keji County because they are coming to Moyo for meetings. I didn’t know whether there is something wrong regarding the arrival and they are not coming to fight in Uganda,” Captain Duku said.

The UPDF 4th Division Spokesperson, Maj Telesphor Turyamumanya, said South Sudan is in war so the government soldiers are fighting with rebels and sometimes for their roads is impassable that is why they are using Uganda as crossing points to access the war torn country.

“There should be no tension as long as UPDF is protecting its people from foreign attacks. The rest you leave it to security to handle and they know what do because Uganda is secure at all points and there is no cause for alarm,” Maj Turyamumanya said.