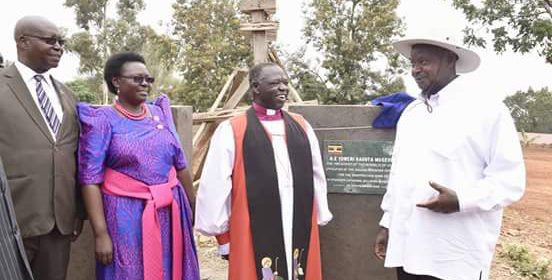 Investigation has began into allegation that the Nebbi Anglican Diocese bishop Wathokudu Alphonse was involved in grabbing Olar Upenja land .

The bishop has been named among those that allegedly grabbed more than 46 acres of land belonging to Olar Upenja at Amuze village ,Zeu sub- county in Zombo District. Evidence presented to the Albertine Watch suggest that Bishop Alphonse Wathokudu connived with the local authorities to forcefully take Olar land located in Amuze village in Zeu sub -county . It’s alleged that the land is apparently under full control of Nebbi Anglican Church diocese .

The land which is now being occupied by Zeu senior Secondary School fully belonged to Olar Upenja but the Bishop has intefered with the judicial process that would give Olar Upenja full ownership of his properties. According to the letter dated on 13th/01/2014 that was presented to Albertine Watch at the time of writing this report, it’s believed that the land in which Zeu secondary school is constructed on belongs to Olar Upenja .The clan leader of Awora in Amunze village Mr Mzee Obiya authorised and permitted Olar Upenja to go ahead an share any meeting of the land with authorities . According to the letter seen by Albertine Watch, Mr Obiya cited that Zeu Secondary School is aware that the piece of land being occupied by the management is under customary land which is very clearly stipulated in the article 26 of the constitution of the Republic of Uganda that the land belongs to the people . The family of Openja Uyulu said that they don’t have any objection to any constructive objectives to reject any development on the land since its being occupied by the school and Nebbi Diocese . However, it’s seem that Nebbi Diocese under the influence of Bishop Alphonse Wathokudu is playing hide and seek games .The diocese has adamantly rejected the proposal by Olar seeking for compensation. According to the letter written on 04/01/2018 by Olar Upenja addressed to the foundation body Papoga Church of Uganda , Olar Upenja instructed the foundation body not to put any structure again on the land until further notice . ” under this reference ,peace be upon you . I do take this moment in many occasions but you have failed to understand the sense of our direction, so failure for that reason we alert you for the following actions; Donot put any structure again ,dont cut out any banyan trees again for you have no humanity to talk to us and without our consent don’t think of land agreement ,no way to put land mark .Any thing concerning land advancement without our blessing words, we say there should be no development on our land because we are stupid and very poor ,we lack money and many other basic needs as Bishop stated out.But you should know that it’s Allah the almighty who is highest in heaven and on earth and he also gifted us with the land you want to take responsibility of” the letter reads.

It’s alleged that Bishop Alphonse is one of the most corrupt and evil clergy in Uganda with no mercy at all .It’s reported that everything which Alphonse does in the diocese bring suffering to the local people .According to our source in the Diocese, bishop Alphonse doesn’t deserve his position because what he has done in Nebbi Diocese in the last ten years is only evil .The bishop is involved in abuse of churche offices ,corruption and discrimination of clergies .Alphonse Wathokudu whose term in office expired last year refused to step down as he vowed that he will leave the Bishop office when president Museveni also leave power. According to Anglican Church doctrines, bishops are suppose to serve for 10 years after which they can retire from active priesthood, but this is not the case with Bishop Alphonse Wathokudu who think that no body is capable of leading Nebbi diocese apart from himself . Nebbi Diocese is one of the peoorest diocese in Uganda .There is belief that Alphonse spend most of diocesan funds on his personal project .