DRC Youth Activists Calls for Uninterrrupted Popular Demonstration From December, 2017 until the departure of Kabila and all his accomplices . 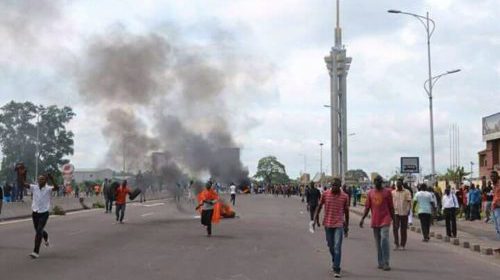 On this symbolic date of December 19, 2017 which marks a year to the day since the expiration of the second and final constitutional term of Joseph Kabila, and ten days of the end of the “bonus” granted to him in favor of New Year’s Eve Agreement to organize the elections by 31 December 2017 at the latest:

LUCHA reiterates this: as long as Joseph Kabila is at the helm, there will never be free, inclusive and peaceful elections that will allow Congolese to take their destiny into their own hands by electing a new President of the Republic and other leaders of their choice. The ongoing maneuvers at the CENI and parliament to craft a tailor-made electoral law and impose a machine to steal votes, are just the latest illustrations of this evidence. As for the electoral calendar of the National Electoral Commission-CENI, as we have denounced it since its publication, it is nothing other than the continuation of the strategy of the slip implemented since the Congolese people has resisted the attempts of Kabila and its regime to revise or amend its constitution to formalize their retention in power.

LUCHA recalls that the only source of legitimacy of the institutions of the DRC is the constitution of the Republic. After raping her, Joseph Kabila trampled the New Year’s Eve accord, which gave her a semblance of political legitimacy to hold elections in the past 12 months. Past midnight on 31 December 2017, even this semblance of political legitimacy will have ceased to exist and Joseph Kabila and his government, which LUCHA has long called on Congolese to stop recognizing as legitimate authorities, will no longer be just occupiers and invaders. , to be treated as such by our people and by the international community.

LUCHA recalls that the only reasonable way out of the current stalemate and the only guarantee for genuinely free, inclusive and peaceful elections is the departure of Kabila and all the members of the elective institutions of his regime, follow-up of the rapid establishment of a neutral transition led by dignified and competent personalities from civil society to organize the elections, stabilize the country and strengthen our democratic assets, within a reasonable time to be fixed by mutual agreement.

The LUCHA salutes the bravery of the Congolese and who have understood that Kabila is not ready to leave, and who in recent months have participated massively in citizen mobilizations across the country to demand his departure, braving the fear and repression of this bloodthirsty regime. Those who have lost their lives, those who shed their blood, or who are still held in the regime’s jails for resisting deserve the gratitude of the entire nation. Above all, they deserve that we finish the job by driving out this regime and gaining the freedom for which they sacrificed themselves.

In this spirit, and as an epilogue to the series of citizen mobilizations in recent months, LUCHA calls on Congolese to demonstrate massively and peacefully throughout the country and uninterrupted from Friday, December 29 2017, until the effective departure of Joseph Kabila and his accomplices at all levels. As already experimented, to succeed and continue as much as necessary, LUCHA recalls that everyone must demonstrate in his neighborhood and his avenue, the goal being to completely asphyxiate the regime and neutralize its means of repression, including barricading the main roads and neighborhood roads to prevent or minimize their movement. LUCHA insists that this unprecedented mobilization must remain peaceful. Let Kabila and his henchmen continue to seal their fate by spreading violence; do not answer it under any circumstances. Justice will take care of them once the people have liberated themselves. LUCHA urges the true Congolese patriots in the army, the police and the intelligence services to take sides with the people and to refrain from shooting or firing on the latter, because this fight for liberation is also theirs. and that of their children.

Finally, the LUCHA expresses its support for the Catholic Church, which has been the victim of cowardly attacks for the past few days because of its stance and courageous actions, particularly in Kinshasa, as much as it welcomes the rapprochement of the main leaders of the Catholic Church. political opposition to speak with one voice and finally coordinate actions on the ground. LUCHA calls on all social and political forces, including lay Catholics, other religious denominations and the political opposition to:
To stop the procrastination and to have a single coherent message, namely to demand the departure of Kabila and the establishment as of January 1, 2018 of a neutral, unique transition guaranteed to have truly democratic elections;Call, mobilize and above all, for leaders of civil society and the opposition, personally participate in uninterrupted demonstrations from Friday, December 29, 2017 until the effective departure of Kabila and his accomplices at all levels;Be ready to put in place the neutral transition and support the mission of its future leaders.

As Thomas Sankara said, “we do not liberate a people, a people liberates itself! For the Congo and our people, resistance is no longer an option; it is an absolute necessity and urgency. Our people have a unique opportunity to finally write their own story. LUCHA plays and will continue to play its role, whatever happens.