Over 200 Oil Refinery Affected people have volunteered to get arrested today for demonstrating against government delayed compensation. 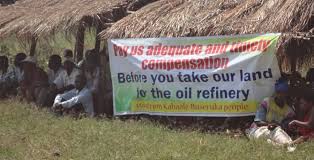 The Oil Refinery Residents Association plan to stage a massive demonstration ahead of presidents Museveni and Magufuli visits to Hoima. In a letter dated 10th/October/2017 addressed to the Inspector General of Police, ORRA cited that they will today the 19th /October /2017 hold a peaceful demonstration in Hoima district against the government delay to compensate them and over its unfilled commitments to the refinery affected people as per the Refinery Resettlement Action Plan report of 2012.

ORRA is an association of over 70 families living in Kabaale- Buseruka, Hoima district, whose land was acquired by the government for Uganda’s proposed Oil refinery project.

The protest which will take place in Hoima district will be participated in by over 200 people. It will coincide with the visit of the president of Uganda – H.E.Yoweri Kaguta Museveni and his counterpart H.E. John Pombe Magufuli of Tanzania to Hoima.

“Through this letter, we would like to inform you that as the refinery affected people, we shall assemble and demonstrate in towns, streets, and other areas of Hoima. Our actions will be a peaceful reminder to our good president of the need to ensure that the development of Oil through refineries and Oil pipelines among other infrastructures should not happen at the expense of human rights to prompt, fair and adequate compensation to project-affected people”. ORRA letter reads partly.

Since the government acquired the land in 2012, the local affected people have suffered grave injustices that no other government in the world can allow her citizens to go through. They have suffered a lot of atrocities including the displacement of women and girls including widows, orphans, and vulnerable groups without any framework to ensure sustainable livelihoods and protect their dignity. The people have been denied their fundamental rights to use their lands to feed their families by initiating a cut-off date on the affected people’s land. The government has additionally failed to restore social and economic livelihood in the planned resettlement at Kyakaboga. Instead of fulfilling her promises to the affected people, the government has responded with threats and intimidation to arrest and imprison friendly Civil Society organizations and local NGO activists working to protect the rights of refinery affected people.

The Oil refinery affected people petitioned the Bunyoro Kingdom Rukurato, the ministry of Energy, inspector general of Government, the Uganda Human Rights Commission, and the speakers of parliament of Uganda among others but all their petitions were not put into consideration and the government has ignored their pleads hence suffering continue up-to-date. ORRA however believes that the planned demonstration is an appeal to the president to address their grievances.

It’s undeniable that Oil and natural gas resources fuel the economy of any given country where the resources are in abundance. Oil Converted into petrol and diesel fuels various modes of transportation that allow for the movement of goods and people from one place to another. Due to the enormous financial benefits that result from the Oil industry.

In the Albertine region, the discovery of Oil was greeted with great optimism. It was estimated that by 20120, Oil production per day would hit between 200,000-230,000 barrels per day and the revenue from the Oil and gas exploration was estimated to hit an accumulated value of US$3 billion in annual revenue between 2020 and 2030. President Museveni at the time noted with great excitement that “Oil is wealth and Uganda need the wealth to build infrastructure, security, hospitals and the schools”. However, the exploration and extractive activities already have negative social and political impacts on the local people and the surrounding environment. Although the discovery of oil and gas created a sense of hope and expectation that the revenue from the Oil would lead to the development of local communities and the country as a whole, in most cases, this expectation has remained illusory as the exploration of the Oil resources has led to the destruction of local communities. Evidence suggests that whether or not the communities benefit from Oil and gas is a fundamental of government. All in all, then, the mere discovery of Oil in Uganda should not because of celebration and excitement because as an extractive item, Oil poses great challenges to people in which it is located, particularly if these communities as the case is with Kabaale in Buseruka.

The evidence to date in the Albertine region of Uganda shows that the oil exploration will plunge the region into anarchy and endless conflict. The Uganda Human Rights Commission report indicates that from 2011 to date, not less than 100 violent conflicts have been sparked by the exploration of Oil in the region, particularly in the districts of Bullisa, Hoima, Nwoya, Nebbi, Amuru, and Masindi among others.

There is already tension, sometimes reaching critical and conflicts dimensions, between Uganda and the Democratic Republic of Congo on their shared border along with Lake Albert since Oil was discovered.