Are Donors promoting Corruption in Uganda by continuous funding of projects?, Clerics concerned.. 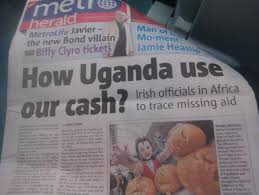 Speaking to this website this morning, Father Kyaligonza said donors are much aware of the high corruption level in Uganda adding that both government officials and other donor community benefit from the funds being brought in the country, making it very hard for donors to cease funding to government because they all benefit from their joint theft.

A number of reports have pinned Uganda government for the lack of will and commitment to fight the scourge of corruption despite the incessant funding of capital projects across the country.

Within the East Africa region, Transparency International TI ranks Uganda as the most corrupt country within the regional block.

The Eat African Bribery Index 2012 states that Uganda is most corrupt followed by Tanzania and Kenya in third positions respectively.

Uganda registered the highest bribery levels with a percentage value of 40.7%, while Tanzania had 39.1%, Kenya 29.5%. Burundi, the worst ranked country last year recorded a significantly lower index of 18.8% this year. With an aggregate index of 2.5%, Rwanda remained the least bribery-prone country in the region.

Anti-corruption experts attribute the problem in Uganda mainly to inadequate political will to fight corruption coupled with low salaries for civil servants.

For instance, millions of dollars worth of funds was diverted from the Global Alliance for Vaccines and Immunization GAVI in 2006 and from the Global Fund to Fight AIDS, Tuberculosis and Malaria in 2005

The news that about 44.5 billion shs in donor funds earmarked as crucial support for rebuilding northern Uganda, ravaged by a 20-year war had been embezzled from Uganda’s Office of the Prime Minister (OPM) hit the headlines in many donor capitals four years ago, casting doubts in Uganda’s will to fight corruption to date.

Despite investigations, none of the high-ranking government officials who managed the implicated offices have faced criminal sanction. Most often they have remained in office, untouched, while individuals working at the technical level have faced prosecution and, in some cases, jail time. Even when ministers have been forced to resign from office, such resignations have been temporary; they were eventually reappointed to key positions in government, in what someone can term as a “game of musical chairs.” Years of evidence indicate that Uganda’s current political system is built on patronage and that ultimately high-level corruption is rewarded rather than punished.

Media attention of Uganda’s corruption often focuses on the “big fish who got away” and who were allegedly protected from prosecution by other elites.

A cross section of donors recently threatened to cut funding to Uganda if the issue of corruption is not critically looked into.

Two issues come to the limelight and help to explain why government lacks the will to fight corruption.

The above records make any right thinking member of the public insinuate that government officials who are intentionally stealing public funds are being shielded by the state from appearing before prosecution, amidst ongoing debates of possibility that donor behaviours of continuously giving money to Ugandan government is one of the causes of perpetual embezzlement of public funds in the country.

Despite knowledge of the high level of corrupt in Uganda, donors have time and again offered huge sums of money to government to undertake various projects across the country.

The million dollar question is: “Why are donors still injecting their money in Uganda even when they know that government cannot be trusted with issues of money”.

Plinth Technical Works Ltd, was in 2015 contracted by Ugandan government to tarmac seven roads at a tune of over 10 billion shs in Hoima municipality, Hoima district under the first phase of Uganda Support to Municipality Infrastructure Development USMID project.

The project which commenced in early 2015 with funding from World Bank was expected to be completed by February 2016. However the mid 2017 World Bank inspection report shows that the project had not even reached even the 80% completion rate, throwing yet another doubt on functionality and capacity of some government agencies to clearly monitor these ongoing projects.

Reports obtained from office of the Hoima municipality town clerk shows that the contractor had completed 93% of all road works, a figure that was rejected by World Bank officials.

Martin Ora, the World Bank country representative in his earlier warning said the municipality would lose more funds for future projects, adding that Hoima municipality leadership is not competent enough to handle such big projects, amidst reports that there could be foul play or mismanagement of the project funds by some municipality officials.

However, by September 2017, World Bank had already channeled part of the 7 billion shs meant for the second phase of the Hoima municipality USMID project despite shoddy work observed on some roads especially along the Main Street and Rukurato road, leading to Bunyoro Kitara Kingdom palace.

“But why do some of these donors keep on wasting their time and money on this government even when they know that safety is not guarantee?” Mr Ayesiga said an exclusive interview this morning, adding that; “I personally thinks there is something wrong with some of the donors who keep pouring their hard earned money in some corrupt governments such as Uganda with the current state of affairs”.

Responding to the above query of possible foul play with project funds by Hoima municipality officials, the municipality mayor Mrs. Mary Grace Mugasa says there is no such case of mismanagement of the funds.

In her latest outburst, Mrs. Mugasa insists that the first phase of the project will be completed in three months, after which the second phase will commence.

Hoima municipality is among the few other pilot municipalities including among others; Arua, Mbale, Fort Portal and Gulu which are currently benefiting from the World Bank funded initiative, with future expansion to other districts, however Hoima is the worst performing municipality.

What do CSO’s and Clerics say:

Reverend Father Bonny Kyaligonza of Hoima Catholic Diocese and also the director of Gulu University Hoima campus however says government is not corrupt, but some individuals in government are the ones making the system rotten with no light in the future. The rampant cases of embezzlement of funds have made members of the public to lose trust in most government institutions such as the Police.

Speaking to this website this morning, Father Kyaligonza said donors are much aware of the high corruption level in Uganda adding that both government officials and other donor community benefit from the funds being brought in the country, making it very hard for donors to cease funding to government because they all benefit from their joint theft.

He adds that government also lacks the vision to propel the country to development by shielding some corrupt officials from facing prosecution.

He says the case of the Hoima USMID project and other projects being mishandled in similar ways across the country are unfortunate occurrences in which the leaders are failing to perform their duties as mandated, leading wastage of resources.

Father Kyaligonza says corruption will only be contained if all government sectors are hurt or government officials feel the pain being felt by the ordinary people when they learn that money has been stolen by the “big fish”.

Onyai Vicky Emmanuel, a human rights activist in Nebbi town says he cannot rule out the possibility that corruption is being carried out in a coordinated manner, citing that especially embezzlement of funds starts right by people from the Central government, thereby stalling most activities at the grass root level.

He says government has deliberately refused to enlighten the citizens, beneficiaries are not being involved, they don’t participate in some government projects, making them incapacitated to make government accountable, hence compromising quality of some projects at the lower level.

In a telephone interview last evening, Mr Onyai expressed a great concern that misuse of public office in the form of embezzlement of tax payers’ money has taken over all government sectors in the country, including churches, cultural institutions, adding that if punitive actions are not taken against culprits, the vice will never be wiped out in the country but will continue to soar and containing it will be very difficult in the near future.

Mr Onyai says even the Non-governmental organizations NGOs working on issues of corruption and other human rights violations have been threatened by government of possible closure if they dare speak against the vice, making them fall prey to some of these uncouth acts especially by some government officials.

As a remedy of minimizing the corruption scourge in the country, Mr. Onyai suggests that there should be a concerted effort in monitoring what government does in a bid to hold officials accountable and promote transparency across the country.

The reporter name is withheld for security reason.