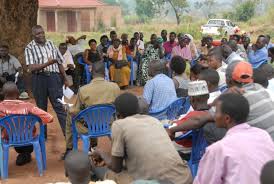 The Albertine Watch is informed by reliable source that over 80 refineries affected families that were set to be relocated from the refinery area by government have refused to be relocated.

The government had set to relocate the oil refinery affected community on August 10, 2017.However, they have refused to be relocated until the government fulfill the promises it made to them.

These are the families whose land was part of over 29 Square Kilometers that was acquired by the government in 2012 for Uganda’s proposed Oil refinery project.

The relocation exercise was met with resistance.

The Oil refinery affected communities were set to be relocated from Kabaale –Buserruka to Kyakaboga, Hoima district.

The function that was expected to be presided over by high level officials from the ministry of Energy, Ministry of land and other government agencies was boycotted and met with resistance in broad day light by the local affected people.

In a meeting held on August 8, 2017 at Nyahaira Primary School in Hoima district, over 80 families unanimously resolved that unless the government provides them with land titles, electricity, water sources and access roads as promised in the Resettlement Action Plan (RAP) 2012, they will not allow to be relocated to Kyakaboga.The meeting included ministry of Energy officials delegated by Mr. Simon D’janga, the state minister for Energy and mineral development, the Directorate of Petroleum ,the local government leaders, Hoima district community Development officer and representative from the Oil and Gas Police and other refinery affected people.

In the Resettlement Action Plan report, the ministry declared that it would provide each person who opted for physical relocation with land identified on a case-by-case basis in the neighborhood of the refinery area. The ministry also agreed that it would provide houses to each of the families and would not relocate families in a special settlement as this would lead to their isolation.

“The Ministry committed that it would conduct a livelihood restoration exercise that would involve supporting families with grants for farming and business “, said Mr Opio Christopher the secretary of Oil Residents Refinery Association (ORRA). He further added that the ministry of Energy has broken promises they have made. Only 46, out of 83 families are getting houses contrary to commitments in the RAP report” .He said.

Meanwhile, government failure to enable effective community participation in the Oil refinery project is already causing resentment from the community .The community feel that they are not included in the decision making processes in regards to Oil and Gas development.

In the meeting that turned volatile, the refinery affected community vowed that they will never participate in the handover ceremony of the houses. They further said that they will never relocate until government fulfills its promises as stipulated in the Refinery Action Plan report (RAP).